Emerging artificial intelligence models operating in the art world are the subject of a wide ranging discourse full of promises and threats, whose potential implications are only barely beginning to be felt. Many are captivated by the universe of possibilities that open up when an artist is in direct contact with an archive of visual learning stretching back and across all recorded history; many remain skeptical of what they see as outsourcing human creativity to a database machine. The former will make the case that the study of art history, for example, is already akin to accessing such a database, except now it’s one that’s more complete and quick than a human brain; the latter will remain unconvinced and evoke the notions of mistakes and the soul of intuition. This conversation about the nature of cognition and creativity is itself a fascinating exploit, well suited to the kinds of conversations artists and philosophers entertain. The exuberance of being in contact with a cosmos of ancestors in your field is a moving proposition. But there’s another side to this, and that’s the impact on graphic and commercial illustration, animation and character design, and the like — professional commercial artists who, without reference to the philological debate, are daily seeing their role erode, their very job itself being rendered obsolete in a way that few are worried will happen in fine art. At the same time, since so many of the AIs currently available to the public are prompt-based, it’s ludicrously easy to borrow and steal another artist’s style — just by typing their name into the program. So is the role of AI in the creative process a tool, a collaborator, or the competition? Yes.

‘Artists in front of their art’ #stablediffusion

As @Merzmensch has already pointed out, it’s fascinating how the AI invents art pieces inside an art piece 😍 pic.twitter.com/BTM7hYABs6

For artists keen to explore the nexus between their own creative process and the augmentation and innovation of AI, there is also a difference between analytical and generative models — one which sorts through datasets on the user’s behalf, and the other which creates “new” content based on everything it has learned so far, which is more analogous to a human brain having an idea. This and other points along the way are where questions of originality, authorship, and intellectual property come into play, occasionally in stark relief. An artist tells Midjourney, Dall-E, Night Cafe, Stable Diffusion, Dreamstudio or a host of other apps that they’d like “a landscape with a distant city skyline at night in the style of Henry Cole,” or “a statuesque elf queen with ancient weapons aboard a tall ship sailing toward the horizon in the style of Rembrandt,” or “jazz-era alley cats on a spaceship in a folk-art woodcut like Grant Wood,” or — well, you get the idea. This is a fun game that will eat thousands of waking hours in its addictive entertainment. Taken seriously, it could be a great way to achieve the instant gratification of an embodied idea, as a sketch; many programs let the user customize the file once generated. Not to mention all the fun to be had with poetic or nonlinear language. Sasha Stiles, POETRY IS THE ORIGINAL BLOCKCHAIN, 2021 (Courtesy of the artist)

But what happens when an artist enters the prompt referencing the style of a living artist, one who would not like to be the learning model fodder for a global network of instant competitors who seem to be flirting with copyright infringement by deliberately evoking their name in work they plan to claim as their own? And as a practical matter, what happens when a magazine’s art director or an advertising company can take what would have been an email specifying the themes and parameters of a commissioned illustration — a public park in winter with playing children, dogs, and snow in the trees; a medical office waiting room with a diverse group of patients all on their iPhones in photocollage style; a buffet table laden with exotic desserts and wildflowers in a Pop art style — and type those same words into Midjourney instead and get their result for free? Yeah, that is going to be a problem. But back in the fine art world, with its higher tolerance for academic experimentation and breaking things, painters and photographers, poets and sculptors, filmmakers and animators, and all kinds of artists whose work requires a profound engagement with world cultures, hidden histories, literature, architecture, politics and other expanded data sets — artists who truly view their relationship to AIs as collaborative, mutually informed, and the harbingers of a future in which the singularity is not only a physical union with our technology but a cognitive and consciousness-based one as well — are exuberant and quite bullish about the possibilities.

The @HerVoiceNFT combines poetry by yours truly, dance by @tyspectives & @delacyn, and AI animations that move and change to sound by @AyaScientist. Creative director: the one and only @vsnaire 🔥🔥🔥 pic.twitter.com/Hi3CMm36j3 Vince Fraser for Artechouse (Courtesy of the artist) 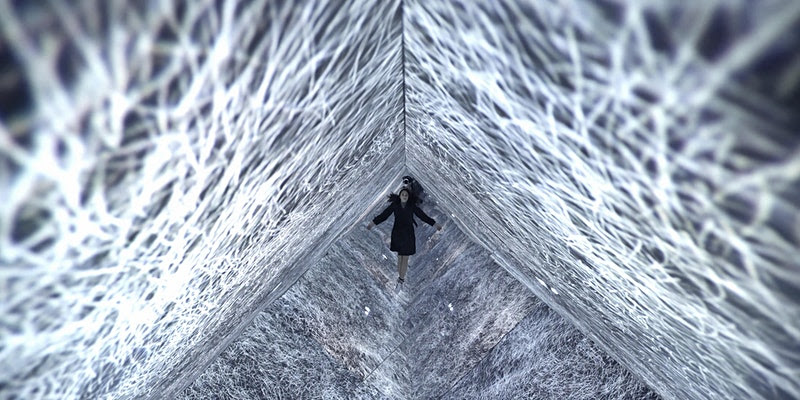 Closing Out a Great Week with Strength