With the new socially conscious dark horror/drama They/Them (They “Slash” Them) debuting on Peacock TV last week, Kevin Bacon once again brings his star power to an unexpectedly sinister role that’ll leave people talking. Getting the opportunity to talk directly with the prolific actor himself, not only about the project but his approach to all of his roles — and improve our “bacon number” (more on this in a minute) — was an opportunity we couldn’t pass up. He’s one of Hollywood’s greatest actors, but he’s also a chill yet engaging interview.

Released by Blumhouse and premiering at Outfest LA before coming to Peacock, They/Them has some bloody moments, but the film (which counts Bacon as a co-producer) is mostly about the discrimination and the lack of acceptance faced by the queer community in modern times. Writer/director John Logan (Gladiator, The Aviator, Skyfall) explores the real terrors in our world — in this case, the psychological and physical abuse that takes place at gay conversion facitilities — even while he satires camp comedies and slashers, in both lighthearted and heartbreaking ways. 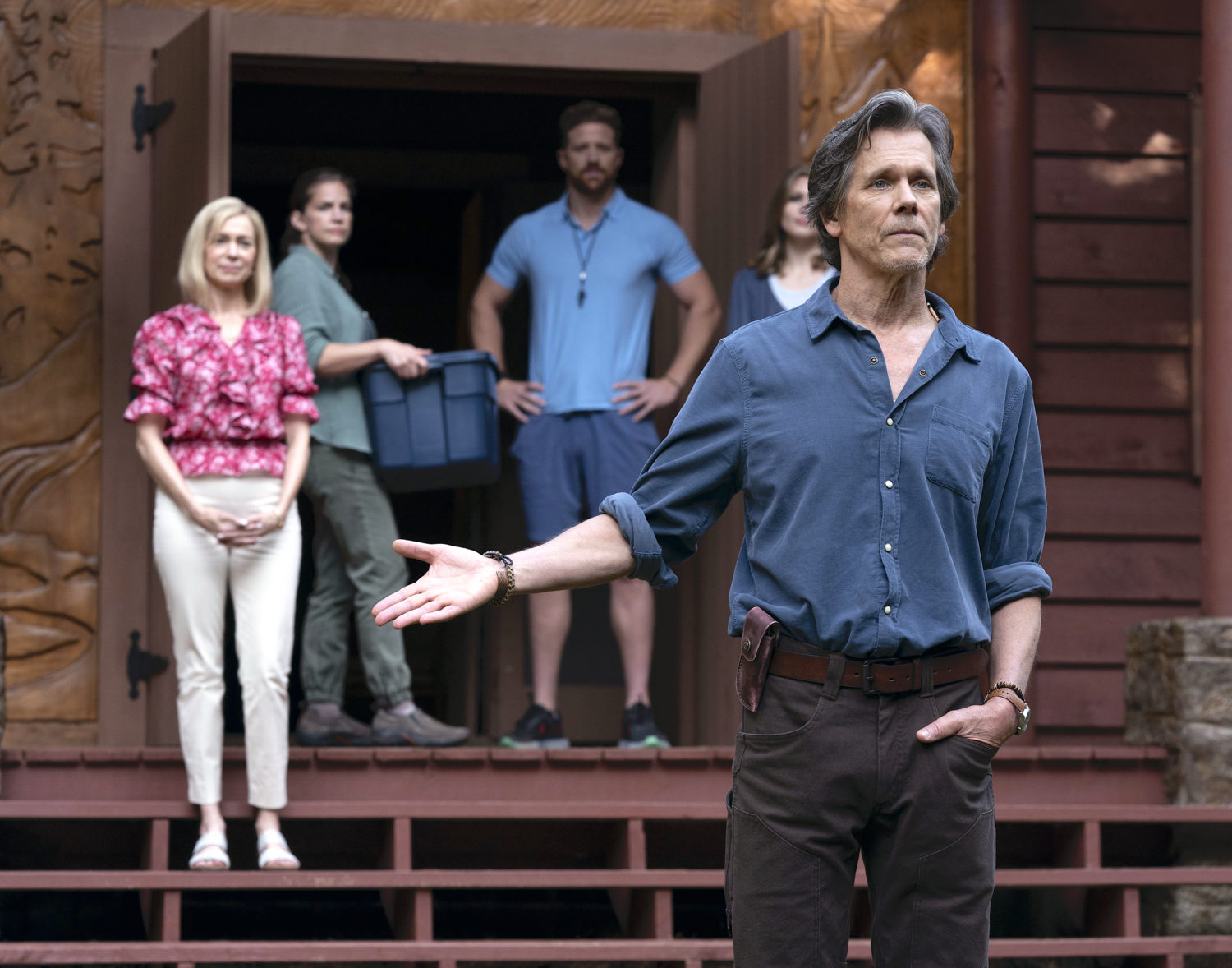 “One of the things that John Logan spoke to me about when he sent me the script was that he wanted to make a film that showed how disturbed he was by the idea of gay conversion, and that it could be still continuing and be legal in 20 states, and something like 50,000 young people a year go through some form of this,” Bacon tells us. “You could make a documentary, and actually Blumhouse did called Pray Away, or you could make a serious kind of drama, and maybe some people would watch it, but I’m sure many people wouldn’t. Or you could take that issue and frame it in a world that is a little bit heightened, and pays homage to the ‘70s slasher films. Make something that a young person –maybe in a very conservative community or someone that’s closeted or feeling bullied or just kind of struggling with issues of identity– could see someone like themselves up on the screen and feel a sense of empowerment and a sense of identifying with these characters. That was an interesting idea to me, and why I wanted to be involved.”

The cheeky title plays on today’s cultural emphasis on gender identity pronouns (those who prefer “they/them” tend to be nonbinary or gender fluid) but the movie also develops gay and lesbian characters, friendships and hook-ups. The cast includes both gay and trans actors playing likewise, revealing the family struggles that brought them to a place set on changing who they are. It’s timely to say the least.

It also has authentic performances by its young actors, led by the highly watchable Theo Germaine (The Politician), and some creepy turns by seasoned ones including Carrie Preston (True Blood) and Anna Chlumsky, who grew up on screen herself with her first big role as a child in the tearjerker My Girl. But K.B. has the most work under his belt. The 64-year-old (who looks pretty much the same as he did decades ago) has been in dozens and dozens of classic movies including Animal House, Footloose (his breakout starring role), Tremors, A Few Good Men, Apollo 13, Mystic River, JFK, and on and on.

Unlike, say Nick Cage (who made no qualms about his choices when we interviewed him a couple of years ago), most of Bacon’s projects have been memorable. He’s been in so many big hit flicks, his name will forever be attached to what could be called a meme before there were memes, or a hashtag before there were hashtags. We’ll just call it a concept: that we are all interconnected by six degrees (or less) of separation. Deemed “Bacon’s Law” and turned into a game at some point, the Hollywood version notes that any actor out there connects to Kevin in less than six jumps. It’s become an established part of pop culture, but we weren’t sure we should ask about it. Might he be sick of it by now?

He’s embraced it in recent years either way, founding the Six Degrees organization, a nonprofit launched in 2007 that connects people and causes, to raise money for grassroots charities. He also headed a campaign during the pandemic shutdown called the Six Degrees Social Distancing Initiative, encouraging people to stay home and away from each other during COVID’s height.

So how does he feel about it today? “Six Degrees was something that went viral before we even had the word viral… you know, in application to collective thought, and what’s weird about it is that it didn’t go away,” he answers. “But also that it spread just by word of mouth. There was nothing to hold in your hand. Eventually there was a physical manifestation of the game but that was many, many years later. Take me out of the game and it’s still a beautiful concept. We really are all connected and I believe that.”

Peacock has created a “Six Degrees of Kevin Bacon” section on its streaming channel as a way to highlight They/Them and the actor’s films available from their service, but even before its release last week, the competition was doing the same thing. Netflix has its own Six Degrees section, though Bacon didn’t seem to know too much about it when we informed him. The category includes films he’s not even in, starring people who rank as “ones” on the Bacon meter, such as Tom Cruise.

Hollywood’s overall connection chain/”Bacon number” is staying in the one and twos for many, it seems. The actor tells us he has no intention of slowing down work-wise (he has a couple films coming up and has been producing more, too) and he’s stayed busy for good reason. Bacon is widely regarded as a down-to-earth, easy to work with, fun dude; something he’s been showcasing on TikTok as of late, winning new fans, many of whom weren’t even born when he started acting. He sings (which he always did: look up his band The Bacon Brothers), he cooks, and even performs with his daughter, Sosie Bacon, on the social media platform. Married to actress Kyra Sedgwick for 34 years, he’s got two kids, his daughter (seen in TV series including 13 Reasons Why and Scream) and musician son, Travis, of the metal band Contracult. They/Them is touted as “an LGBTQIA+ empowerment tale,” but its camp setting is reminding a lot of people of Bacon’s early role in Friday the 13th, which set the template for all slashers to come. After having sex and lighting up a joint in bed, he’s stabbed by an arrow protruding through his neck, spraying blood everywhere. There are similar kills in his latest, but the themes also bring to mind Footloose, which explored how older folks try to stifle the freedom and expression of youth due to fear and lack of understanding. In Footloose he was the rebellious young hero to John Lithgow’s conservative bad guy. In They/Them he’s the heartless elder trying to suppress young people from expressing their truth and, no shocker, he’s very good in this guise.

Recalling his dark/douchey characters in Wild Things and Crazy Stupid Love, we ask if he prefers doing them as the interview comes to a close. “No, I don’t really. I only really like good complex roles,” he replies. “Unlike a lot of other actors, I’m not afraid of these roles. I don’t look at doing terrible things on screen and say, ‘Oh, I can’t do that because people are gonna think that’s me. That’s Kevin.’ I really don’t care what people think about me personally. I just want to play different kinds of men and walk in different shoes. That’s why I became an actor. So if a bad guy is cookie-cutter or a one-note mustache-twirling type, that’s boring and I’m not interested. If a bad guy is complex and unusual and surprising, like this guy is, then I’m in.”