Our 2022 holiday edible list is sure to have grandma higher than gas prices after a Russian invasion.

Some things will feel a bit more traditional than others; some will get you higher than others. What’s most important is that they’re all a great starting point for members of your family that are yet to experience mind-altering substances. That being said, you’re in charge. You don’t want Uncle Billy tripping balls and being convinced the cranberry sauce is trying to attack him, so ease people into all this stuff. Kiva’s holiday showstopper returns for 2022 to dose turkeys and potatoes from Humboldt to TJ. Now a few years into its gravy adventure, the chocolate titans continue to know it out of the park with this one. There is a reasonable argument to be made it may even be “The” holiday season edible at this point. Thanksgiving Eve is one of the booziest nights of the year, but we have an even better option for you — make s’mores with mushrooms in them. Now you could go the easy route and use one of the many psilocybin-infused chocolate bars now produced throughout California. Or you could go the more exciting way and use Mush Mellows! The SoCal-based infused marshmallows feature an eighth of mushrooms in every pack. Remember to go easy out the gate. You can always eat more, but you can’t eat less!

If you can get your hands on some edibles from Oklahoma, you’ll undoubtedly have a much easier time getting your whole family high given the 100mg limit on what California defines as an edible. Now there are loopholes, we’ll get to that, but generally, if you want a high-potency piece of chocolate, you’re not going to be in luck in California. Nevertheless, just like excess weed exits California, the same thing is happening with OK edibles. Keep an eye out! We’ve seen plenty around L.A. As noted, there are some loopholes where things are allowed to be stronger than the state edible limit. Sublingual offerings like Breez mints don’t fall into the same category as regular edibles — they’re more like a tincture in the eyes of the regulation. That is why, in addition to these super strong mints, you can find things like super potent BBQ sauce and syrup that have come to fall under the same definition in recent years. Again, handing these out is a responsibility in itself. But if your family rages pretty hard, this is a cost-effective way to get like 10 people good and stoned and 20 people a light buzz. 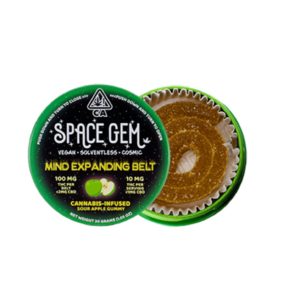 The reimagining of the cannabis gummies by Space Gem is an absolute breath of fresh air. If you put it in a blind test against the wider gummy market, it would likely be one of just a couple you’d be able to identify given how much of the marker looks the same or is literally coming from the same white label processors in different bags. Also if you’re going to make a purchase in one of the most flooded spaces in cannabis, might as well buy something that was made in Humboldt County, where people really care about the weed.

So you’ve never eaten a cold cookie in your life? Don’t worry, we have the answer to that too! SelfBaked’s cookie mix is a fun option for after you put the leftover turkey away and it’s time for the grand finale. It’s not just a gimmick, the mix placed second overall in The Farmers’ Cup in San Diego.