There’s a fierce competition going on at Susan Miller Dorsey High School in West Adams, but it’s not on their football field that has groomed generations of championship players. It’s in the kitchen, and the coach is Culinary Arts Instructor and Dorsey alumnus Sonja Mason-Briscoe.

Common Threads Cooking For Life, which is a nonprofit program that infuses science, technology, engineering and mathematics with nutrition-education for high school students, teamed some of the culinary world’s best chefs with students for a top chef-style competition on the Dorsey campus Monday. The chefs were teamed up with Dorsey seniors to cook up recipes, provided by the Common Threads team, that included jicama as the surprise ingredient. Judges included the area’s Assemblyman Isaac Bryan; Nichol Whiteman, CEO of the Los Angeles Dodgers Foundation; and Mason-Briscoe, lead teacher of the School of Business and Culinary Arts Management program at Dorsey High School.

“With this program, we’re taking on students and not just showing them how to cook, but teaching them the importance of healthy eating and making healthier choices,” Armstrong told L.A. Weekly Monday, on the campus whose alumni include poet Charles Bukowski, attorney Robert Kardashian, singer Billy Preston and Buffalo Bills guard Jordan Simmons.

“The million dollar kitchen here, with state-of-the-art equipment, is part of the amazing  culinary program they have at Dorsey,” he said. “It goes way beyond your basic home economics kitchen.” Armstrong teamed up with student Brian Morales for fish tacos and a confetti slaw,  Chung and student Alex Maya delivered a rainbow stir-fry, and Falkner switched from her sweet roots to savory alongside Drew Crisp Solomon for a cauliflower tofu bowl with avocado and cilantro. Taking home the title of top chef was Guadeloupe Santiago, who prepared Ethiopian spiced chicken with Izard (recipe below.)

“We have a student-run restaurant here that seats 120,” instructor Mason-Briscoe tells L.A. Weekly, while supervising the competition prep. “They don’t just learn cooking, but work in the front of the house, budgeting and researching to develop the menus. They create special lunches that they sell to the staff. Once a week, we have an international buffet with a different theme, which requires some research. If they’re doing Morocco, which many of the students don’t know where that is, they learn all about that area’s culture and cuisine, and use their math skills to figure out servings and measurements.  All the academic principles are put into the Culinary Arts Management program, including conflict resolution and working with others.”

Common Threads provides children and families with cooking and nutrition education to encourage healthy habits that contribute to wellness. The program focuses on equipping under-resourced communities with information to make affordable, nutritious and appealing food choices, wherever they live, work, learn and play. Because food is rooted in culture and tradition, Common Threads promotes diversity in all lessons and recipes, encouraging participants to celebrate their culture. 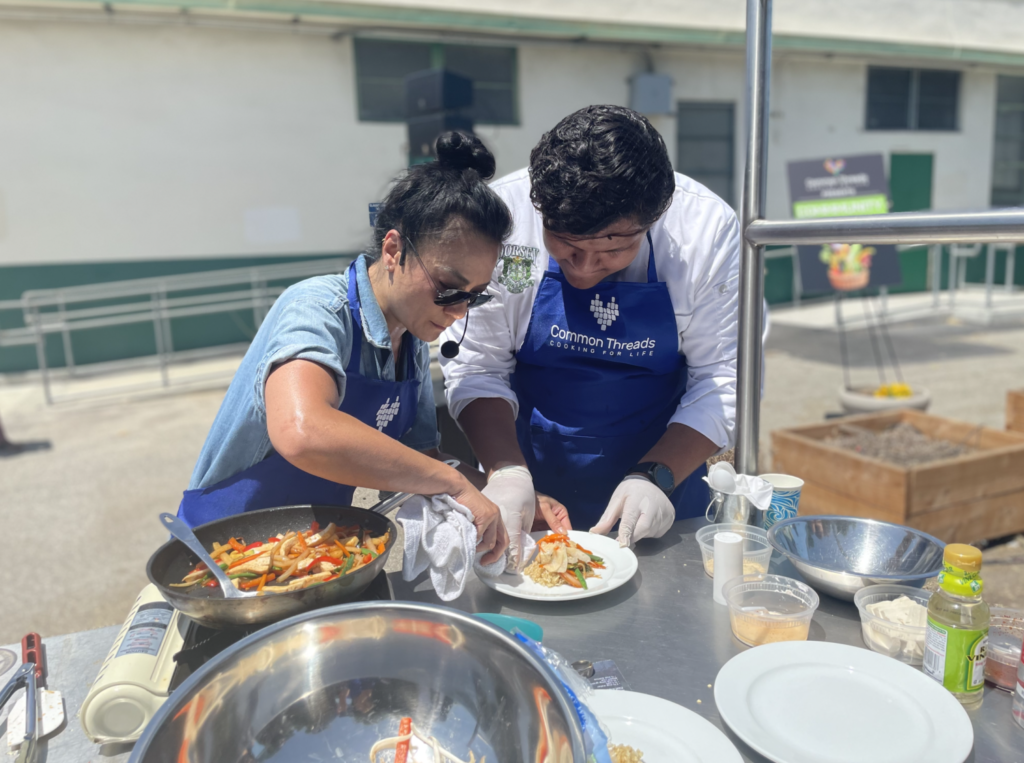 Since 2008, the national nonprofit has worked collaboratively with school districts, individual schools, community organizations, and other partners to embed health and wellness programs at more than 200 schools and community sites throughout LA County, resulting in reaching over 130,000 students (PreK-8), parents/caregivers and educators, cooking and serving over 950,000 healthy snacks and meals, and providing over 1.4 million hours of hands-on learning.

“If those seniors decide to continue with culinary as a profession or means to pay for college, great.” says coach Mason-Briscoe. “The goal is that they at least know how to cook well enough and healthier now, so that they can combat some of the pre-existing conditions in our community and in their families. We are still a low to moderate income population with students coming from group homes and foster families. We hope that what they learn here they will use in their lives, personally and professionally.”