In the crypto world, 12 years ago is ancient history

For this story, we have to dust off the crypto history books and turn back the page to 2010. A man named Gavin Andresen, a software developer from Massachusetts launched one of the worlds first Bitcoin faucets.

If you don’t know what a crypto faucet is, it’s a website that gives away free cryptocurrencies. Typically users have to do nothing more than solve a captcha, or answer a question and input the wallet address and they can receive free coins (or part of a coin) once per day. These faucets are generally funded by one or more large holders of the cryptocurrency who want to help grow adoption and generate interest in the project.

In Gavin’s case, he was giving away 5 BTC per day at his website freebitcoins.appspot.com! If you had the foresight to get in on this back in 2010, when Bitcoin was trading at under a dollar each, you would be sitting on a small fortune today.

Alas, the party didn’t last long. Gavin’s faucet ran out of money in 2011 and he was forced to shut it down. In the short time the faucet was up, it spit out over 19 thousand bitcoins, which at today’s value would be more than 350 million dollars. The site is now down, but using the wayback machine, we can take a peak at history: 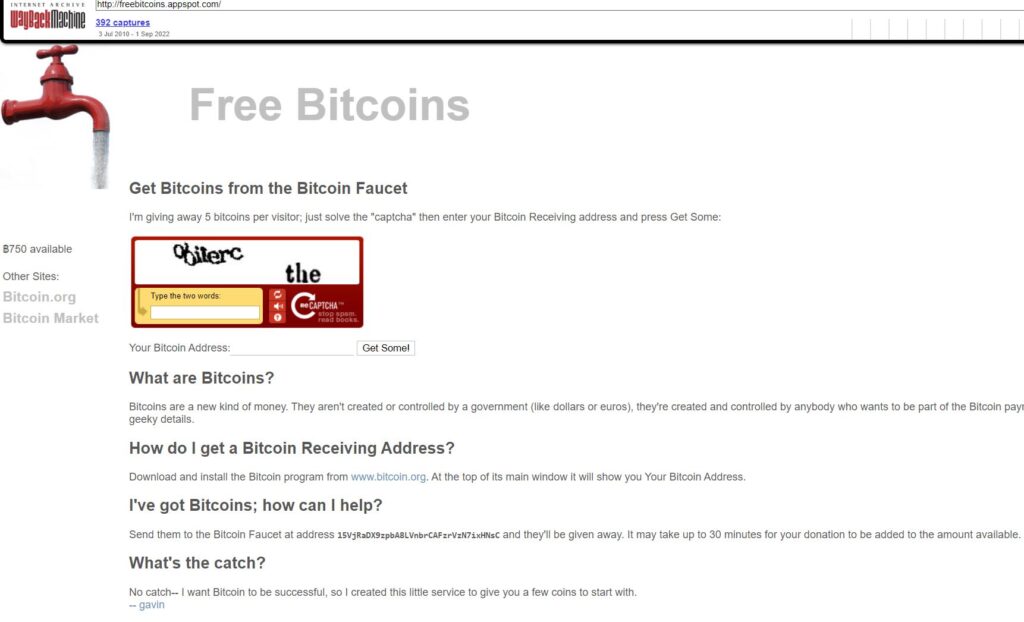 It’s clear Gavin had a vision for what Bitcoin could become and altruistically tried to spread awareness.

Can you imagine being one of the lucky ones who got in on this early faucet? Maybe stuck your wallet on a USB and forgot about it until a decade later when you saw the news about Bitcoin hitting $20k. If only!

So what happened to Gavin Andresen?  Believe it or not, after fawning over Bitcoin in its infancy, Gavin expressed support for Bitcoin’s rival (Bitcoin Cash) and was quoted as saying “Bitcoin Cash is what I started working on in 2010”. Still Mr. Andresen is still active in the crypto community, frequently tweeting his thoughts on the industry.

It’s amazing to think about how one humble faucet gave away enough cryptocurrency to make its users a millionaire a dozen times over. Hey maybe I’ll go check my garage for some decade-old USB drives, you never know right!?